The features of tea drinking traditions in Russia and in England

Chapter 1. Tea drinking traditions in Russia and in England.

Chapter 2.The methods of the investigation.

2.2 The experiment of the investigation. 8

Englishmen are proud of their traditions. Every nation has its own customs. British is a tea drinking nation. I'm interested in the history of English customs and traditions.

The object of the study is the tea party.

It's subject is a tradition of tea drinking in these two countries.

The aim of the study is to compare the features of tea drinking traditions in Russia and England.

The main tasks of my research:
-to learn facts about the traditions and customs of the tea party
-to learn new English words
-to find proverbs and phrases with the word ,,tea''
-to find some differences of tea drinking in Russia and England
-to make a questionnaire and booklets

I've used such methods as:
the method of comparison, questionnaire, content and analysis

The practical significance is to make the conclusion of the custom's differences between two countries.

The material can be used at the English lessons and help people, who are interested in the English traditions.

The base of the research are pupils of form 5B.

Chapter 1. Tea drinking traditions in Russia and in England

1.1 The history of tea in Russia

The history of Russian tea has more than one hundred years. It began in 1638.A Russian Tsar Michael Fedorovich got a special gift from the ruler of Mongolia. It was 64 kg of tea. At first the king didn't like tea. They drank herbal tea. Import of tea to Russia began in 1769 when the contract with China was signed. For a long time tea was popular only in Moscow because of its high cost. The way from Pekin to Moscow took more than a year. At the end of the 19th century tea became cheaper. In the 18th century only wealthy merchant families drank tea. In the 19th century tea was spread everywhere. Now it is impossible to imagine our life without tea.

1.2 The features of tea drinking traditions in Russia

Tea is a significant part of Russian culture. It warms you up and it is nice after a big meal. It is impossible to imagine a traditional tea party without a samovar. It was made of bronze and copper. It was a symbol of comfort and hospitality. This is a good invention that combines a kettle with heating chamber inside.

Russian people drink tea all day long, after meals and between meals. In the afternoon they like to have tea with cakes, pancakes, crackers, pies or chocolate. They often add sugar, honey or jam. Drinking tea with lemon is a Russian tradition. Russian people love to mix tea with other herbs for taste. They drink green, herbal and black tea.90% of people prefer black tea and only 10% of them like green tea. The common types of tea are Russian Caravan and Keemum. Most people prefer to drink tea from saucers. A Russian person will invite you for a cup of tea rather than for a meal out. People like to visit each other for a cup of tea. In Russia the main thing in the tea party is the atmosphere of joy and peace. They chat, relax and drink a lot of tea in a pleasant company.

There are many cafes and restaurants which are made in the traditional Russian style with a table cloth, a samovar and a traditional meal.

Things which were invented in Russia.

1.3 The history of tea in England

Britain is a tea drinking nation. Every day they drink 165 million cups of tea. Each year about 144 thousands of tons of tea are imported.

A Portuguese princess brought tea to England in the 17th century. Tea was a royal gift because its price was high. At that time only rich people drank tea from porcelain cups which were very expensive.

Drinking tea became a tradition only in 1840.The 7th Duchess of Bedford Anna ordered to serve tea with bread, butter, cakes and biscuits. At first British drank green tea. In the 18th century many people drank tea.

1.4 The features of tea drinking traditions in England

Traditionally British prefer to serve their tea in porcelain teapots and teacups. They drink Black tea (English breakfast and Earl Grey), White tea, Green tea and Herbal tea. English Breakfast fills you with energy. You can relax with Earl Grey. Green tea is good after meals. English tea is a mixture of several black teas from India and Sri Lanka.

The British drink tea 6 times a day. Each time of the day has its own variety of tea and its tradition of tea drinking.

Early morning cup. The British wake up early at 6 o clock and they need a cup of strong tea. They prefer English Breakfast or Irish tea.

For breakfast they have Prince of Wales tea. In the evening they like Earl Grey.

There are 2 types of tea time in England: Low tea or afternoon tea, High tea or meat tea. Low tea is served with light snacks such as finger sandwiches, crumpets, pies with ginger and scones. High tea includes meat, bread, dishes and dessert. Most British enjoy a cup of tea in the afternoon. They have jam, scones and cream. Many of them don't put sugar in their tea. First they pour some milk into the cup and only then they pour some tea. They drink from China cups.

Traditional tea time in England is late afternoon.5 o'clock tea is a ceremony with a table cloth, napkins and a vase.

The Queen makes her own cup of tea at the same time each day. She has Earl Grey.

There are many tea houses in Britain where you can drink different kinds of tea. There are also many tea museums in Britain.

Besides, British don't drink tea in a hurry. They like to chat, relax and have fun.

1.Boil some fresh water into the teapot.

2.Put some hot water into the teapot to make it warm.

4.Put tea leaves into the pot.

5.Pour the boiling water into the tea.

6.Leave for a few minute.

I have found out that the English and Russian tea party has its own features.

English and Russian people have their own opinions about the tea party's meanings. In Russia the tea party is a form of chattering. In England it is important a style of laying the table and the home atmosphere. The main thing for them is to give a good impression. They lay the table in different ways. Each country has its own traditional dishes. They have different ways of making tea.

Chapter 2. The methods of the investigation

The aim of my study is to find out if the pupils know about the tea party in Russia and in England.

The main tasks of the study are :

I've made a questionnaire among pupils of form 5B.It was interesting for me to find out what they know about the features of the tea drinking tradition in Russia and in England. Besides, I wanted to know if they like to drink tea.(Supplements 1,2)

You can see the questions and the results of the questionnaire. I've made a conclusion that

56% of pupils can't answer the questions

2.2 The experiment of the investigation

I have found some ways of making tea. So, I have decided to make an experiment. It is interesting for me to know the best way of making tea.

The experiment 1. I have made tea in a classical way. (Supplement 3) I rinsed the teapot with boiling water and pour it away 3 times. Then I put some tea leaves, poured some hot water and covered with a warm napkin. Then I waited 3 minutes and added some hot water.

The experiment 2. I have used the English writer George Oruell's way of making tea. I took a china cup, warmed it on the fire without water. Then I put 5 spoons of tea leaves, mixed with hot water and poured it into the cup. Then I added some milk. I have made a very strong tea.

I liked the classical way of making tea, because I don't like a very strong tea. I have made a very tasty tea.

So, I have got a lot of useful information about the different ways of making tea.

In my research I have studied and compared the features of the tea party in Russia and in England.

I've learnt much about the traditions and customs of tea drinking in two countries.

I've found interesting information in the magazines and in the Internet.

The results of the questionnaire confirmed the actuality of the theme of my research.

I've made an experiment and found out the best way of making tea for me.

I think that my hypotheses is right. The main tasks have been done in my work.

I've made booklets about the tea party in Russia and England.

Each booklet has some history about the tea party in Russia and in England, the features of the tea party, some interesting facts and useful advices you can use in everyday life.

I hope that this material can help pupils to know more about the tea party in these countries. 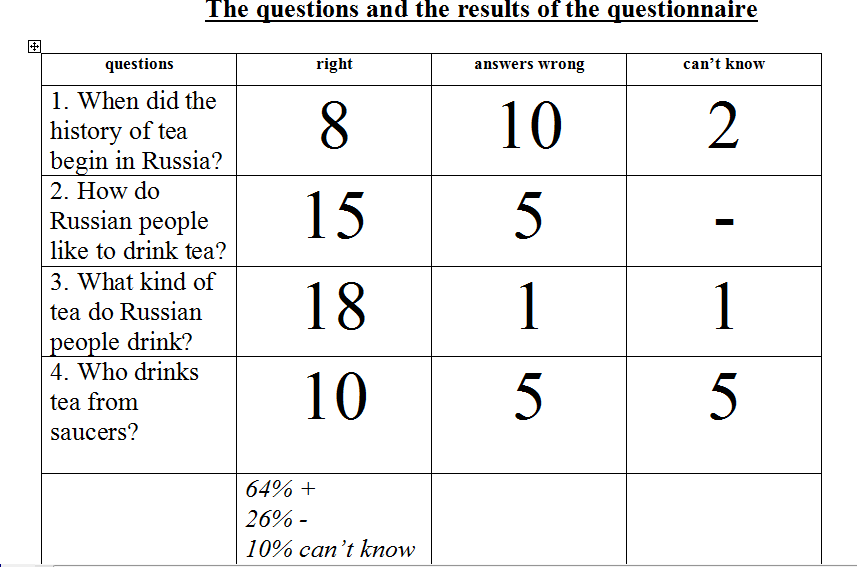 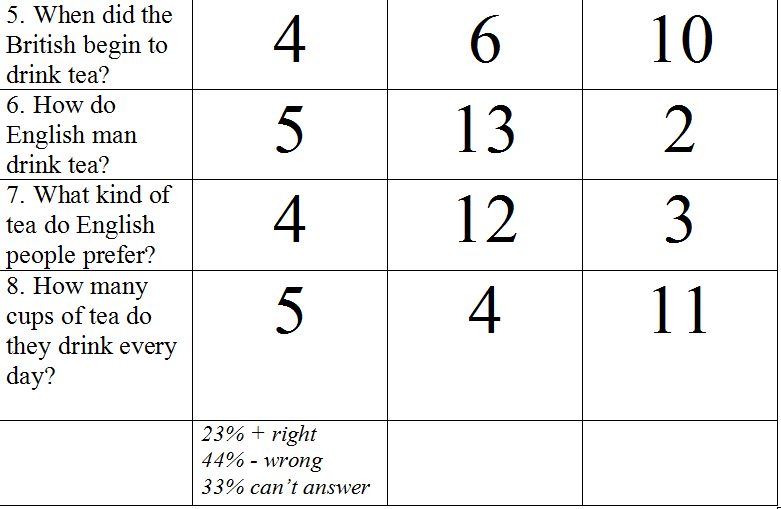 The classical way of making tea.

1.Rinse the teapot with boiling water.

5.Pour some hot water and cover with a warm napkin.

7.Add some hot water and wait.

2.Make tea in a china teapot.

3.Warm the teapot on the fire without filling water.

6.Poyr tea into the cup.

7.Then pour some milk.

The rules of drinking tea.

1.You mustn't drink tea when you are hungry. It is harmful for a stomachache.

2.You mustn't drink a very hot or cold tea.

4.You mustn't make tea for a long time.

6.You mustn't drink tea which you made yesterday.

7.You mustn't drink tea with medicine.

8.You may put sugar in your tea but you can't taste a real tea. 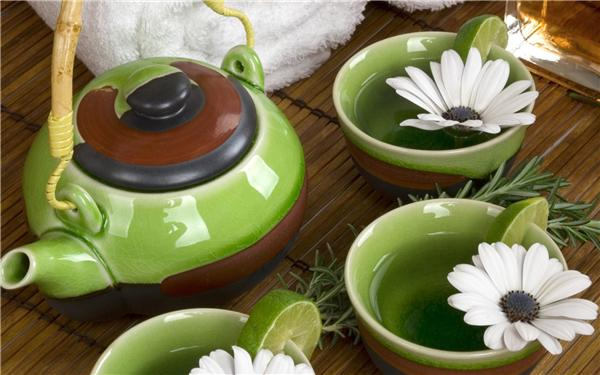 English proverbs and phrases with the word tea.

A cup of tea особа,тип

Not for all the tea in China.

If you are cold tea will warm you.

If you are too heated it will cool you.

If you are dipressed it will cheer you.

If you are exhausted it will calm you.